0
Home Teapot and Tea Do you know the origin and historical development of the purple clay teapot? Do you know the origin and historical development of the purple clay teapot?

Zisha teapots began in the Northern Song Dynasty. In 1976, Yixing Zisha was unearthed from the ancient kiln in Yangjiaoshan, Yixing. It is believed that Yixing Zisha came from the Song Dynasty. The survey manuscript of the Yangjiaoshan ancient kiln site in Yixing once stated that "the upper limit was not earlier than the mid-North Song Dynasty, prevailed in the Southern Song Dynasty, and the lower limit was extended to the early Ming Dynasty", and quoted the Northern Song Dynasty Mei Yaochen's "Wanling Collection" to mean "...Xiaoshi cold spring leaves early flavor, purple The new clay product "Pan Chunhua" and Su Dongpo's "Songfeng bamboo stove, raise a pot and call each other" are the basis. The "History of Chinese Ceramics" published by China Cultural Relics Publishing House in 1982 concluded that "zisha ware" was founded in the Song Dynasty and became popular in the middle of the Ming Dynasty.

Yixing Zisha Pottery is a comprehensive art that integrates ceramic craftsmanship and vessel modeling, sculpture, painting, calligraphy, literature, and gold and stone art. It began in the Northern Song Dynasty and flourished in the Ming and Qing Dynasties. It has roughly gone through the following stages of development: 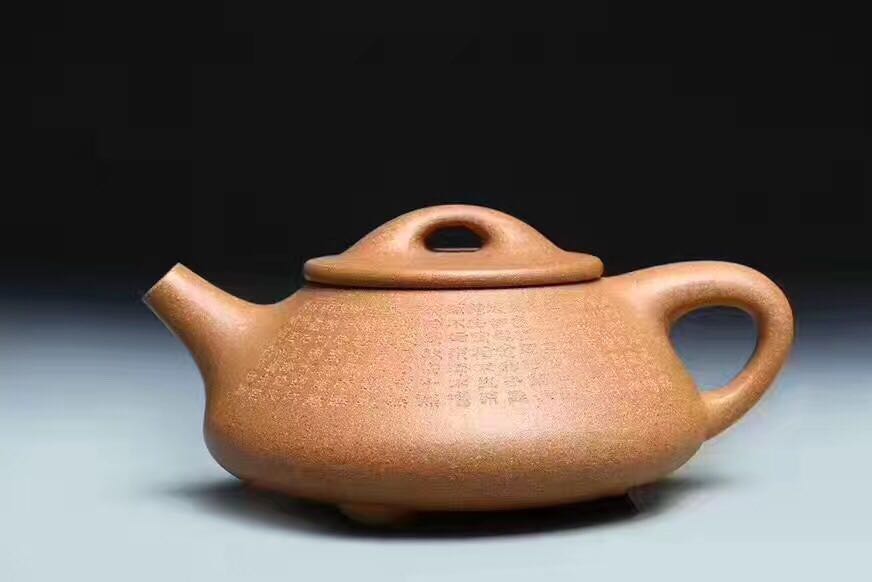 1. From Song Dynasty to Ming Zhengde (approximately 10th to 16th century), it was the initial period of Zisha pottery

In 1976, a large number of purple clay pottery remains were unearthed at the Yangjiaoshan Ancient Kiln Site in Yixing. Appraised by the History Department of Nanjing University and Nanjing Museum, this ancient Zisha kiln site dates from the Northern Song Dynasty. A purple sand handle pot was unearthed in Nanjing in 1966 from the tomb of Wu Jing (the 12th year of Jiajing tomb in Ming Dynasty). Its purple sand shape and production technique are completely in line with the composite pieces of Yangjiaoshan Song kiln remnants. Song Dynasty poets Ouyangxiu, Mei Yaochen, etc. also have poems about purple sand tea sets. During the Zhengde period of the Ming Dynasty, the outstanding potters in various documents included Jinsha Temple monks and Zhuchun.

2. The period from Jiajing to Wanli in Ming Dynasty was the mature period of Yixing Zisha

First, there were Dong Han, Zhao Liang, Yuan Chang, Shi Peng "Four Great Masters", followed by Dabin, Li Zhongfang, Xu Youquan "Three Great Masters". Among them, Shi Dabin is the most famous. The pot-making technique has changed from the earlier one, and completely changed to the molding method of mallet pieces, enclosures, body barrels and mud piece inlay molding method, which is a leap in the technique of purple sand.

3. From the end of Ming Dynasty to Qing Dynasty, the period of prosperity of Zisha craftsmanship

From the end of Ming Dynasty to Qing Dynasty (late 17th century to early 18th century), the purple sand craftsmanship developed towards decorative patterns and patterns. The "Peach Cup" (existing Nanjing Museum) made by Xiang Shengsi at the end of the Ming Dynasty has exquisite craftsmanship, perfect image and fine structure. It can be described as a gem of sandware. The most prominent representative of this stage is Chen Mingyuan in the late Kangxi period. His works are known for his skills and creativity. The style of Zisha in the early nineteenth century changed a lot. The key figure was Chen Hongshou (named Mansheng), a scholar and scholar. His contribution to Zisha pottery was the first time that seal carving was applied to pots as a decorative method. During the Daoguang period of the Qing Dynasty and the Xianfeng period, Shao Daheng, an outstanding purple sand master, made fine selections of clay, profound modeling and superb skills. He developed a generation of exquisite and sophisticated style and won a reputation.

From the texture of the mud to the process, from the research of purple sand to the innovation of genres, there are new developments. Famous hands include Huang Yulin, Pei Shimin, Zhu Kexin, Gu Jingzhou, Jiang Rong, Wang Yinxian and so on. Among them, Gu Jingzhou's purple clay teapot works have smooth lines and a strong and majestic momentum, and are called "the master of pot art". Zisha celebrities of past dynasties have used Yixing's unique Zisha clay, with dexterous hands and ingenuity, endowed with art and inspiration, and created treasures of Zisha pottery with national, cultural characteristics and artistic life. In recent years, famous calligraphy and painting artists Liu Haisu, Li Keran, Tang Yun, Cheng Shifa, Han Meilin, etc. have also written self-written inscriptions, inscribed poems and paintings for Zisha's works, and created new styles, which made Zisha's artistic realm and cultural level a new sublimation.